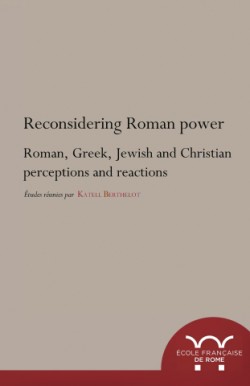 Among the imperial states of the ancient world, the Roman empire stands out for its geographical extent, its longevity and its might. This collective volume investigates how the many peoples inhabiting Rome’s vast empire perceived, experienced, and reacted to both the concrete and the ideological aspects of Roman power. More precisely, it explores how they dealt with Roman might through their religious and political rituals; what they regarded as the empire’s distinctive features, as well as its particular limitations and weaknesses; what forms of criticism they developed towards the way Romans exercised power; and what kind of impact the encounter with Roman power had upon the ways they defined themselves and reflected about power in general. This volume is unusual in bringing Jewish, and especially rabbinic, sources and perspectives together with Roman, Greek or Christian ones. This is the result of its being part of the research program “Judaism and Rome” (ERC Grant Agreement no. 614 424), dedicated to the study of the impact of the Roman empire upon ancient Judaism.

Katell Berthelot is a CNRS Professor working on the history of Jews and Judaism in the Greco-Roman world, and a member of the TDMAM research center at Aix-Marseille University (UMR 7297). In 2014-2019 she was the Principal Investigator of the ERC “Judaism and Rome”.

Archaeology of death and burial in Pompeii - Necropolis of Porta Nocera